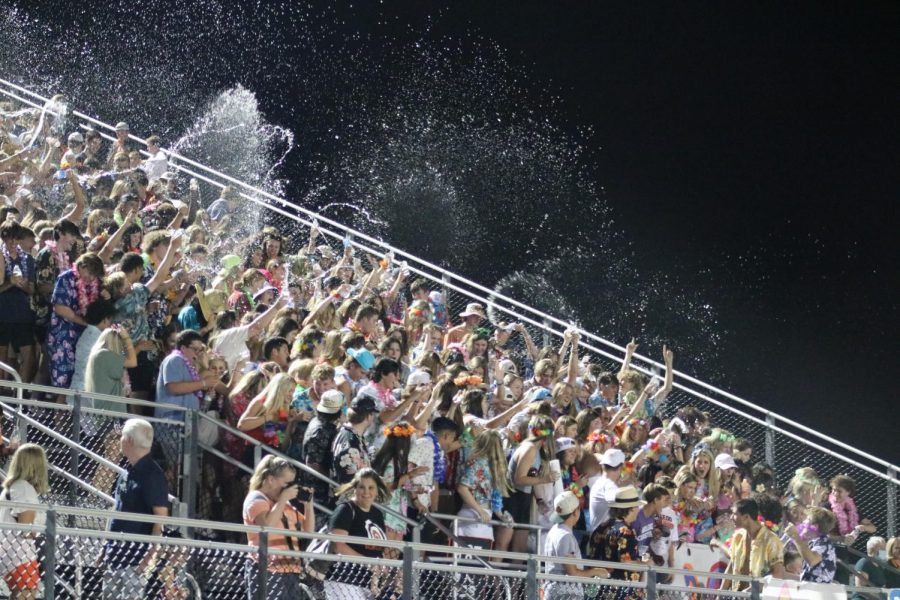 Student Section at the homecoming game

This school year has many new rules to follow including the rules of the football games beginning with the homecoming game Sept. 24. Everyone who will attend the games will now be required to carry a see-through bag or no bag at all. In addition, no one is allowed to socialize under the bleachers during games.

“I honestly feel bad for the younger kids who had to come with their parents and can’t hang out under the bleachers because I know when I was their age that’s all I liked to do,” sophomore Averi Pruitt said.

“The homecoming game was honestly the most enjoyable game we’ve had this year,” Pruitt said. “There was such a huge crowd and the student section was the biggest and loudest I’ve ever heard of them. My favorite thing is going to stand with our student section. That’s why I was so happy when they threw the baby powder up when the drumline was playing. You could barely see anything and everyone was covered.”

Aside from the games, there have been other new rules enforced. Cell phones are no longer allowed in class and seniors can no longer have first period off. In addition, students will be given lanyards with their IDs on them to scan outside of the building to be let inside. Teachers and staff say this is a requirement for students to be safer. It is still undecided when the lanyards will be given to the students.

“My opinion on the lanyards is that I think it’s a good idea because it’s for safety reasons and the schools want to make sure everyone is safe,”  junior Allie Coomer said.  “I have no problem with the lanyards.”

Throughout these past couple of months of school, students seem to be getting used to the new rules and boundaries despite the reactions on social media.

Despite the rules, football games have been selling out. At the upcoming varsity football game, Oct. 15, the Aledo ISD communications have made additional changes to secure purchasing tickets.

Each participant’s family will receive four tickets. Varsity football and student-athletes with athletic passes will not be allowed to purchase an online student ticket. If parents or students have questions about purchasing more than four tickets, coaches or directors will be able to help.