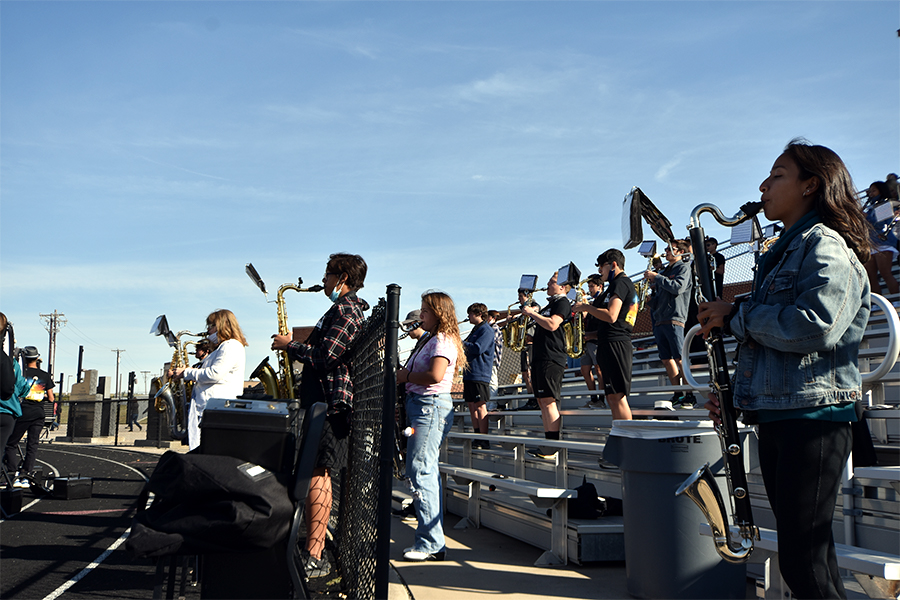 Because of the rise of COVID-19 cases in the band, several students were quarantined to prevent the contraction and spread of the virus. The band itself will continue to play, while students in quarantine practice remotely.

Students quarantined mainly consisted of clarinet players, and also included others in close proximity to those exposed. Quarantined students continued to practice remotely through on-line meetings, but did not attend band events until they had tested negative and confirmed the results with the school.

“I joined Mr Alvin’s WebEx in times when they were outside,” freshman Kendal Kordis said. “I also joined Mr. Paul’s WebEx, and tried to follow along.”

In addition, players uninvolved with cases present in the band continued to play and attend band events as normal. These students took usual COVID-19 precautions – social distancing and hand sanitization – during these sessions and events.

“Band events were the same, but there were gaps in the groups of people,” freshman Kaylee Glover said. “Whenever I looked back, I could see the gap in the band. There were other little gaps, and other people scattered around too.”

Both students attending school and remote learning had private lessons available to them. Those quarantined attended lessons on their own terms, through on-line Zoom or WebEx calls with teachers.

“I used my cell phone to have Zoom meetings with my teacher at certain times,” Kendal said. “I would have to join, and he would send me a code.”

Remote learners practiced the same assignments as those in school, though freshman Eren Volkman said the amount of work became troublesome to keep up with.

“As a remote learner, it was hard for me to complete assignments due to lack of motivation and difficulty navigating the app on Canvas,” she said.