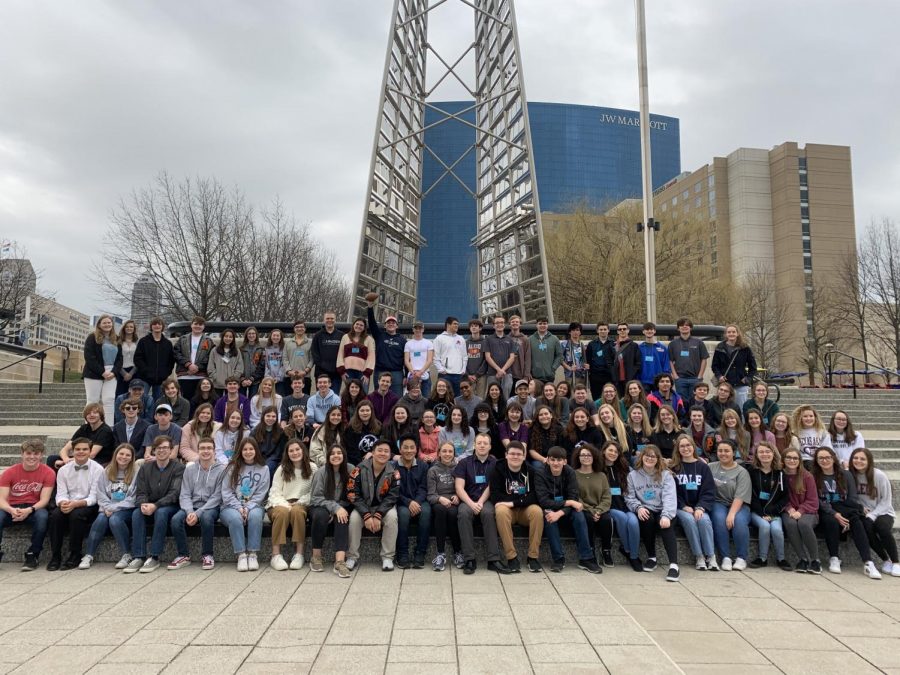 The choir and band at the White River State Park.

As we sat in the meeting room watching everyone walk in and the chairs fill up, an uneasy feeling settled over the room. Once the chairs were full, the adults came in and as she walked by, Mrs. Paul patted our backs and shoulders. The feeling only deepened.

Mr. Paul took his place on the step from where he conducted the band’s rehearsal only hours earlier. He put on his glasses and started reading the email that was about to be sent to our parents.

As he read, I reached up and felt my face wet with tears, only then did I realize I was crying. I looked around the room and saw people reaching up to wipe away their own tears, hugging their friends and some sat dumbstruck as what Mr. Paul was telling us sunk in. We were going home.

The Varsity Treble Choir and the Wind Ensemble arrived in Indianapolis the day before, March 11, expecting to participate in the National Music Festival. Last year, both groups submitted a selection of songs to Music For All, MFA, in the hopes that they would be selected to attend the festival in 2020. A few months later, in July, they learned that they were chosen. Only 12 choirs and approximately 60 bands, symphonies, orchestras or ensembles in the nation received an invitation.

“I was so excited,” junior Brianna Townsend said. “I cried I was so happy. It’s such a great feeling to finally be appreciated after you put in so much hard work. Especially since the choir doesn’t get much recognition, it was really great to finally feel like we had been heard.”

The festival was due to last through Saturday, March 14, with each day full of clinics, masterclasses and performances for both groups. In addition to the work filling each day, the students were also going to get to hang out with other schools at the student social and awards gala Saturday night. The band also planned on seeing the city during their free time, going to various museums and tourist attractions.

“I was most looking forward to that sense of accomplishment after our performance,” band sophomore Annie Fritz said.

Since the trip was called off before the festival started, neither group attended any of it. Instead, they had quality time in their hotel rooms, playing board and card games to pass the time. Later on Thursday afternoon, both groups were taken on a “field trip” to White River State Park behind their hotel.

As soon as the pictures were taken and the students could go their own way, the choir students made their way to a small bridge and formed a circle underneath. Senior London Kasper sat in the middle and the choir did what they do best. They sang. The choir sang both of their a capella pieces, “Ave Maria” and “Prayer of the Children.” As soon as they finished, underneath the sound of the applause from those that had gathered to listen, there were whispers of, “I feel better now” and “that felt good.” Their spirits raised, they left to make the best of their time outdoors. After everyone had explored the area a game of football and Red Rover started and the laughs of the band and choir students could be heard across the park.

“Going to the park gave us a chance to have a little bit of freedom and just have fun,” freshman Ariana Schmitt said. “I got to spend time with a lot of people and build a relationship with them, which was nice since I normally don’t get the chance to spend time with everyone. Singing with everyone also gave us a big morale boost because we were super bummed that we weren’t going to be able to perform so that small outlet really helped.”

Both groups look forward to submitting again this year and hope to go back again next year to get the full experience.